Ocean Cities, an international network of cities in harmony with the marine environment (OC-NET) is one of the structural programs of the Ocean Decade. OC‐NET is an inclusive programme carried with and for the people, promoting bottom‐up collaboration of all actors and endorsing dialogue towards effective policies that set the city border well beyond the shoreline. As such, OC‐NET will effectively contribute to identify and exploit the science we need for the cities and the ocean we want: ocean knowledge and data, scientific and technological capacity, and innovative and transformative solutions.

The long-term outcome of the OC-NET programme is to elaborate a new relation between the coastal cities and the ocean, so that the ocean (and its sustainability) is integrated in the everyday life of the city and its citizens. The “ocean dimension”, which is largely overlooked in coastal cities, has to become a central axis in the daily operations of the city: from a micro-level (i.e. daily consumption habits of coastal city dwellers) to a macro-level (i.e. urban and harbour planning activities and its impact on the neighbouring waters). Science will serve to implement this ocean dimension of coastal towns and cities, starting from local nodes and building into regional networks and one global assembly of cities that embrace this ocean dimension.

To achieve this long-term outcome, OC-NET is designed to produce three mid-term outcomes that will jointly lay the ocean dimension foundations into the daily lives of the city governance and inhabitants.

1. Knowledge gap. Fill in knowledge gaps on the role that cities play as a source of stressors and as a potential solution towards a healthy global ocean. It is widely stressed that the ocean remains largely unexplored, yet our knowledge of the effects of cities on the global ocean per se are still at a very early stage. Science will expose the so far unexplored potential for urban areas to become drivers of change for a more sustainable urban ocean.

2. Identity. Embrace the ocean as a part of the identity of cities and its citizens. The coastline will not be perceived anymore as the limit of the city. Likewise, citizens will not understand the shore as merely a leisure place to visit. The urban ocean will be understood as another area of the city through urban planning and environmental assessments. Likewise, ocean awareness will be promoted among city dwellers through art, wellbeing, health, or sports. The perception that coastal waters are part of the city will be transmitted to all social, economy and administration sectors.

3. Sustainability. The urban ocean offers a wide range of opportunities for blue growth, but only a limited set of them are currently being exploited, mostly linked to a few economic sectors such as leisure. In addition, these are usually exploited under economic drivers that do not properly integrate the sustainability dimension of the natural environment. Through ocean literacy, interdisciplinary science and social interactions, an in-depth understanding of the complexity of the single global ocean connections will be fostered, enabling the city to play a new role in the participating of the ocean in a sustainable way.

The programme’s high-level objective is to turn ocean cities into communities permeable to the marine environment, regenerating the coastline as much as possible and enhancing a harmonic community‐land‐ocean connection through mind (science), heart (art) and soul (awareness). Citizens living in coastal cities have to open their minds and souls to the ocean. This requires an increased awareness of the essential role of the marine environment in the citizen’s daily lives and, possibly more importantly, a more intimate and harmonic relationship between the city, its citizens and the companion sea.

The integration of the ocean dimension into the cities builds on inextricable bonds:

– Ocean cities must be accompanied by “green ports”. Ports and maritime operations are responsible for 3% of global emissions which impact both public health of ocean citizens and climate.

– For effective solutions, scientific knowledge has to come together with a major perception of our belonging to one same ocean and the transformation of the consumer habits in our society. This needs to contribute to build awareness amongst citizens.

The OC-NET programme aims at its high-level objective through reflection and actions in three axes, which are related to the mid-term outcomes: health, culture and justice.

Health of the marine system (HEALTH): Cities are one of the principal vectors impacting the ocean’s health. This includes addressing pollution (challenge 1) as well as multiple stressors on the natural communities nearshore, such as sea-bottom degradation and eutrophication (challenge 2) and ensuring a resilient coastal and marine ecosystem (challenge 5). The health index will not be possible without developing good scientific capacities (challenge 9) and a proper observing system (challenge 7).

Marine science culture and territory (CULTURE): Coastal territories have a marine collective imaginary and identity (challenge 10) that deserve being considered and respectfully adapted as the best model towards local sustainable economies in a changing society (challenge 4). This is not possible unless the planetary boundaries, in particular the value and services of the oceans, are fully understood and integrated in the city’s everyday life by multiple social actors (challenges 5 and 9).

Sustainability and social justice (JUSTICE): Environmental sustainability requires both realizing the natural limits of our marine environment (challenges 2 and 5) as well as implementing effective changes towards a circular blue economy (challenge 4). It is fundamental to become conscious that we share and belong to one same blue planet, where local actions have an impact on global health, and that only through global wellbeing we will ensure local sustainable development (challenge 10). Resilience and sustainability require more equitable societies in the frame of global justice. 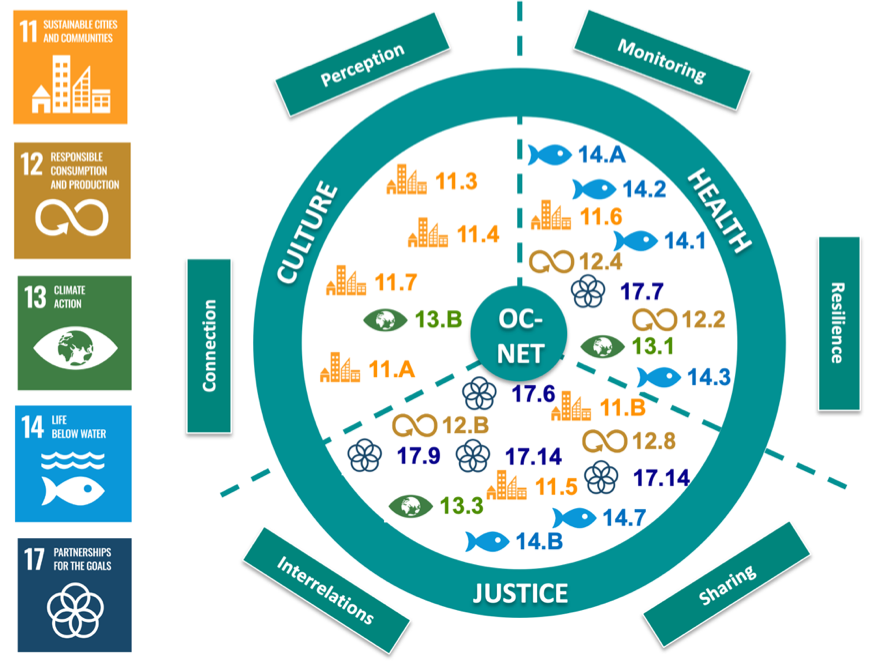 Because of the extreme relevance of ocean cities in terms of population and environment, OC‐ NET uses and promote ocean science to support all UN sustainable development goals (SDGs). This is especially relevant linking SGs 13 and 14 (climate action and life below water) with SGs 11 and 12 (sustainable cities and circular economy) but equally helps address all other SGs through a city-oriented ocean-science global partnership (SG 17).

OC-NET acts on all three Ocean Decade Objectives: identify required knowledge for sustainable development and increase the capacity of ocean science to deliver needed ocean data and information; build capacity and generate comprehensive knowledge and understanding of the ocean including human interactions, and interactions with the atmosphere, cryosphere and the land sea interface; and increase the use of ocean knowledge and understanding, and develop capacity to contribute to sustainable development solutions.

Further, OC-NET is aligned with all Decade Criteria, namely:

(a) Contribute to fulfilling the Ocean Decade Challenges and to achieving the Decade objectives and the associated sub-objectives.

(b) Accelerate the generation or use of knowledge and understanding of the ocean, with a specific focus on knowledge that contributes to the achievement of the SDGs and complementary policy frameworks and initiatives.

(c) Are co-designed or co-delivered by knowledge generators and users, and thus facilitate the uptake of science and ocean knowledge for policy, decision making, management and/or innovation.

(d) Ensure that all data and resulting knowledge are provided in an open access, shared, discoverable manner in accordance with the provisions of UNCLOS, and are appropriately deposited in recognized data repositories consistent with the IOC Oceanographic Data Exchange Policy or the relevant UN subordinate body data policy.

(e) Strengthen existing or create new partnerships across nations and/or between diverse ocean actors, including users of ocean science.

(f) Contribute toward capacity development, including, but not limited to, beneficiaries in SIDS, LDCs and LLDCs.

(g) Overcome barriers to diversity and equity, including gender, generational, and geographic diversity.

(h) Collaborate with and engage local and indigenous knowledge holders

The beauty of this theme is that is built with Modules. Every time you can active or dis-active any module that you would not need anymore ! Awesome WordPress Theme with latest technologies.